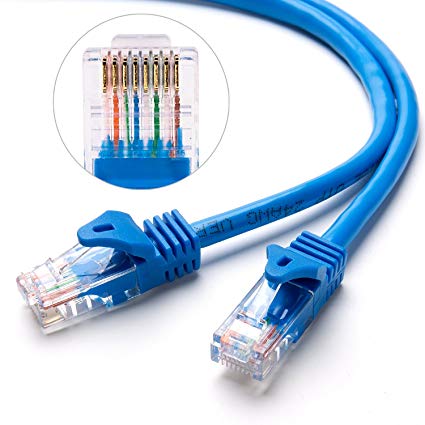 Ethernet cable is one of the most common types of network cables used for wired networks.

These physical cables are limit by their length and by their durability.

If a network cable is too long or of poor quality, it won’t carry a good network signal.

These limits are one reason there are different types of Ethernet cables optimize to perform certain tasks in specific situations.

Ethernet cable resembles a phone cable, but is larger and has more wires. Both cables share a similar shape and plug.

But an ethernet cable has eight wires, while phone cables have four. Ethernet cable connectors are also larger.

Ethernet cables plug into Ethernet ports, which are larger than phone cable ports.

An Ethernet port on a computer is accessible through the Ethernet card on the motherboard.

This port is usually on the back of a desktop computer, or on the side of a laptop.

A variety of different cables are available for Ethernet and other telecommunications and networking applications.

Which are recognizes by the TIA (Telecommunications Industries Association) and they are summarise below:

Both Cat 3 and Cat 5 Ethernet cables are, at this point, obsolete. It’s not unheard of to find Cat 5 cables still in use.

But you shouldn’t even think about trying to buy either of these Ethernet cables.

They’re slow, and nobody makes them anymore.

The “e” in Cat 5e stands for “enhanced.” There are no physical differences between Cat 5 and Cat 5e cables.

But 5e Ethernet is built under more stringent testing standards to eliminate crosstalk — i.e., the unwanted transfer of signals

Between communication channels. Cat 5e is currently the most common type of Ethernet cable.

Mainly due to its low production cost and ability to support faster speeds than the original Cat 5 cables.

Specifically, Cat 6 cables are more tightly wound than their predecessors and are often outfitted with foil or braided shielding.

This shielding protects the twisted pairs of wires inside the Ethernet cable, helping to prevent crosstalk and noise interference.

Cat 6 cables can technically support speeds up to 10 Gbps, but can only do so for up to 55 meters.

The “a” in Cat 6a stands for “augmented.” In comparison to the regular Cat 6 cables.

6a cables support twice the maximum bandwidth and are capable of maintaining higher transmission speeds over longer cable lengths.

In fact, Cat 6a cables are always shielded, and their sheathing which is thick enough to eliminate crosstalk completely makes for a much denser.

They’re proportionally more expensive than other Ethernet cables, though their performance reflects their premium price tag.

Making them an excellent choice for connecting modems or routers directly to your devices.

And Cat 7 cables are always shielded and use a modified GigaGate45 connector, which is backward compatible with regular Ethernet ports.

Although not widely available and with few supporting networking hardware options.

A Cat 7a currently offers the highest-specification Ethernet cables you can buy.

Although the transmission speed is no different than that of Cat 7, Cat 7a cables offer a

more than 50 percent improvement in overall bandwidth, which in certain settings may be useful.

They are far more expensive than many other options though, and so they should only really be considered in very niche cases.

A single Ethernet cable has a maximum distance capacity,

Meaning the cable has an upper limit as to how long it can be before there is a signal loss (called attenuation).

This problem results from the fact that the electrical resistance of a very long cable starts to affect performance.

Both ends of the cable should be close enough to each other to receive signals quickly,

and far enough away from outside electrical interference to avoid interruptions.

However, this precaution alone doesn’t limit the size of a network,

Because hardware like routers or hubs can be uses to join multiple ethernet cables together on the same network.

This distance between the two devices is called the network diameter.

The maximum length of a single CAT5 cable, before attenuation occurs, is 324 feet.

CAT6 can go up to 700 feet. Ethernet cables can be longer but they might suffer from signal loss,

Especially if they pass near large electrical appliances.

Ethernet cable length is a little different if you’re talking about thin ethernet cables known as “10 base 2”,

Or thick ethernet cables are known as “10 base 5”.

The former should be no longer than 600 feet while the latter cable type can reach lengths of around 1,640 feet.